Water operated hand held rock drilling is an efficient and effective way of mining compared to air, electric or oil hydraulic powered equivalent machinery in terms of ton of water / ton of rock and kWh/m drilled.

Rock drills are either used with its own pump set (AquaPack) which is in close proximity to where the drilling is taking place (typically within 20 m) or powered by a remote located pump set (centralized pumping station) which typically feeds 10 rock drills off 1 power pack.

In both cases, water is recirculated i.e. closed loop system other than the flushing water which is approximately 20% of the water used of powering the rock drill. This is done by using our latest technology in PLCs/variable speed drives/mechanical unloading systems/permanent magnet motors or a combination of some or all of the above.
The HPE rock drill returns water back to the pump at max 20 bar, thereby allowing water to be “pushed” back into the pump suction line. 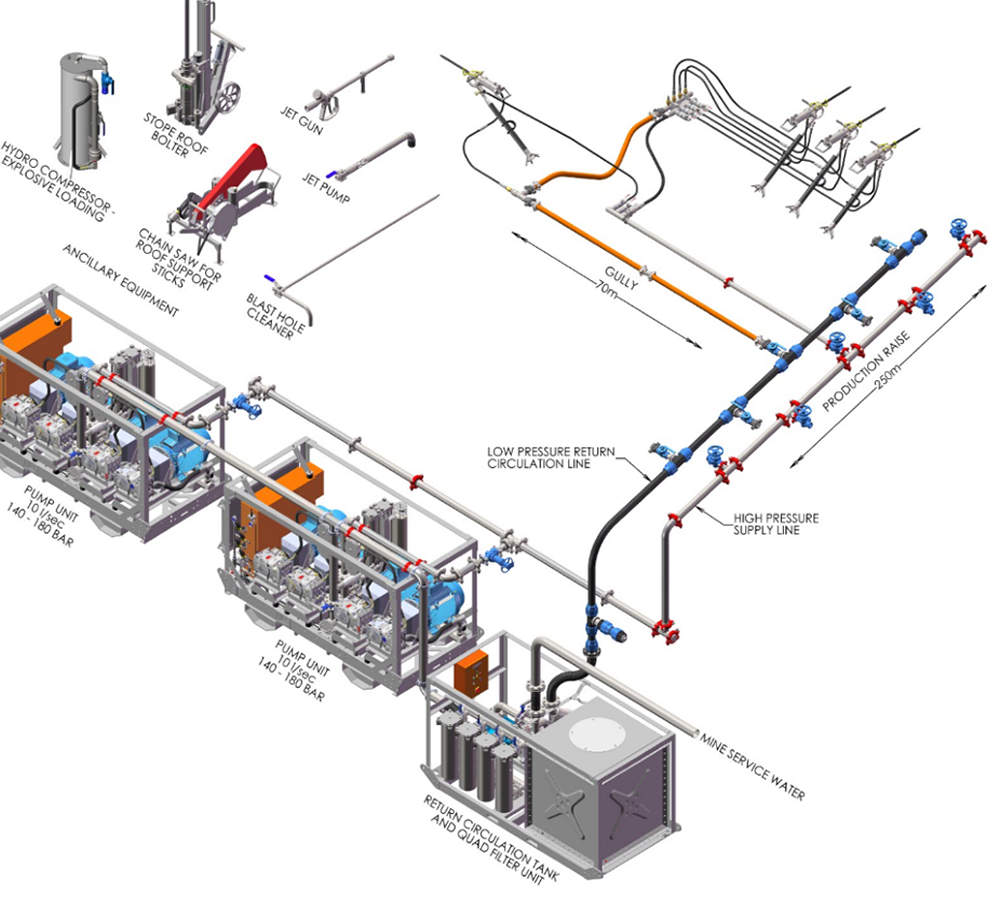 Categories: Mining Solutions, Underground Energy Saving Solutions
Menu
We use cookies on our website to give you the most relevant experience by remembering your preferences and repeat visits. By clicking “ACCEPT”, you consent to the use of all the cookies.Our Privacy Policy
COOKIE SETTINGSACCEPT
Manage consent

This website uses cookies to improve your experience while you navigate through the website. Out of these, the cookies that are categorized as necessary are stored on your browser as they are essential for the working of basic functionalities of the website. We also use third-party cookies that help us analyze and understand how you use this website. These cookies will be stored in your browser only with your consent. You also have the option to opt-out of these cookies. But opting out of some of these cookies may affect your browsing experience.
Necessary Always Enabled

Performance cookies are used to understand and analyze the key performance indexes of the website which helps in delivering a better user experience for the visitors.

Analytical cookies are used to understand how visitors interact with the website. These cookies help provide information on metrics the number of visitors, bounce rate, traffic source, etc.

Advertisement cookies are used to provide visitors with relevant ads and marketing campaigns. These cookies track visitors across websites and collect information to provide customized ads.

Other uncategorized cookies are those that are being analyzed and have not been classified into a category as yet.